SAVANNAH, GA. (January 9, 2018) – Hagerty Jet Group, the experts in business jet sales and acquisitions, announces today that we have been featured in “AINonline” 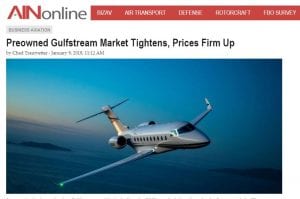 Hagerty Jet Group, which specializes in preowned Gulfstream sales, deemed 2017 a success for the aircraft brokerage industry, noting an uptick in sales transactions, a decline in preowned inventory, and stabilizing prices. The broker also hailed that both Vref and Blue Book published values that were “mostly flat” for Gulfstreams in the fourth quarter.

“For the first time in three years, G550 values remained unchanged,” Hagerty Jet said. “Previously, they had been losing around 18 percent to 20 percent per year over the preceding 36 months.”

The company has seen a “shift in the market.” It said preowned Gulfstream buyers entering the market have been “frustrated” due to fewer choices and firming prices. In fact, Hagerty Jet said that three in-production Gulfstream models—the G650, G550, and G280—have very low inventory levels, with less than 4 percent of each fleet currently for sale.

While depreciation has slowed down for most Gulfstream models, supply remains high in older models—including the G200, GIV-SP, and GV—with inventory between 10 percent and 12 percent, “which is more in line with the current industry average,” Hagerty Jet said.

It also pointed out that the cancellation of the Falcon 5X last month due to engine issues “was a huge blow to Dassault and creates opportunity for Gulfstream to be first to market” with the G500 this quarter. Hagerty Jet also expects that the new U.S. tax bill, which allows for 100 percent bonus depreciation on new and preowned business jets this year, “will incentivize buyers on the sidelines to finally make a purchase and reduce supply further.” It added, “We’re hopeful the new tax bill will incentivize large U.S. corporations to order new airplanes, which will bring more used product into the market in 2019 and 2020.”